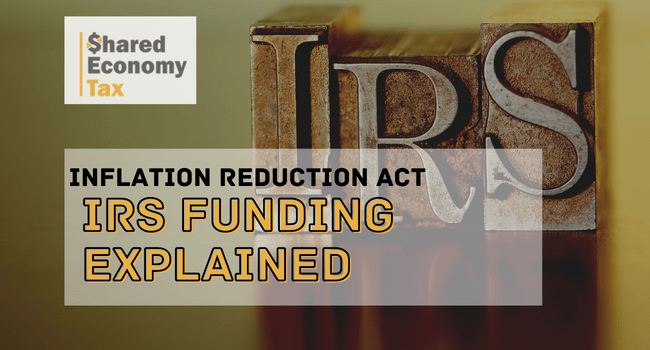 The short answer is, don’t freak out. The new funding has specific uses and will roll out over the next nine years. This guide will explain everything you need to know about the Inflation Reduction ACT IRS Funding provisions.

How Much is the Inflation Reduction Act IRS Funding?

The IRA includes a total price tag of $870 billion over the next ten years. This funding will go towards climate change provisions and health care subsidies.

The IRS funding portion of the Act will increase IRS funding by $80 billion between 2022-2031. Of the $80 billion, $46.5 billion is for enforcement activities such as increasing IRS staff. Economists have predicted that the funding will pay for itself due to higher tax revenue and from increased tax compliance from businesses and individual taxpayers.

What Will the New IRS Funding Go Towards?

The item that leads the most headlines is that the IRS will hire and train 87,000 new auditors. For reference, the IRS currently employs 35,000 auditors, so this addition would more than double the size of the agency. Since this is a sizable increase in staff, it will take years to recruit and train the new auditors. But, taxpayers should expect an increase in audits once the agency trains its new staff.

The funds are also for improving taxpayer services. According to the Washington Post, during the 2021 tax filing season, the IRS could only answer 9% of calls it received. The increased funding will include additional customer service agents that can help taxpayers navigate issues and answer questions regarding their taxpayer accounts. But, like the new auditing staff, getting the phone agents trained will take a while.

Increased Staff in Other Areas

The IRS will also be increasing staffing for the Tax Court, Treasury Office of Tax Policy, and the Treasury Inspector General.

A large portion of the funding is for upgrading the IRS’s technology. In many cases, the IRS relies on technologies that are decades old, and the agency still uses programs written in COBOL. The IRS provides funding for the agency to upgrade computer systems to utilize advanced scanning technology and reprogram antiquated software.

The bill also provides funding to create a free e-file system for individuals. The agency will create a task force to spearhead the effort over the next nine months. The free e-file system intends to allow taxpayers with W-2-only filings to file their returns directly with the IRS. However, it will likely not be able to handle complex returns. 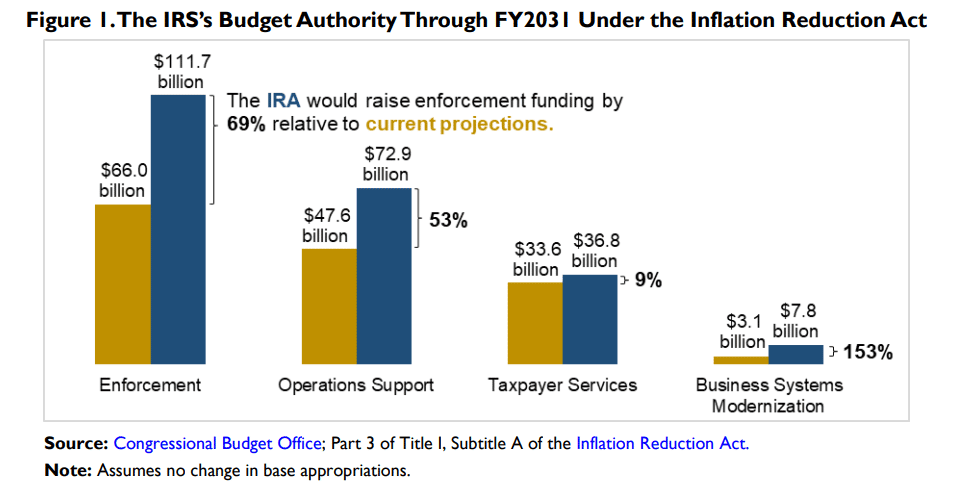 What Are the Enforcement Priorities for the IRS Expansion?

Land conservation easements are agreements between a landowner and a land trust or government agency that restrict the development and use of the land to protect its natural resources. The Internal Revenue Service offers tax incentives for landowners who agree to limit the development of their land.

Unfortunately, unscrupulous companies have been selling land easements to taxpayers and then creating appraisals with wildly inflated values of the land easements. The taxpayers then use the inflated appraisals to claim a tax deduction. Some of the additional funding will increase the investigation of these transactions.

Before 2022, taxpayers were responsible for ensuring that they reported their crypto transactions to the IRS since the IRS did not receive any information from crypto exchanges. While the transactions were always taxable, crypto complicates enforcement due to the lack of records.

The IRS has recently stepped up its enforcement of cryptocurrency transactions, issuing several guidance documents and rulings on the taxation of these assets. The most significant change is the requirement that all cryptocurrency transactions be reported to the IRS, regardless of whether they result in a gain or loss. This reporting requirement applies to all taxpayers, regardless of whether they are individuals or businesses. The IRS considers cryptocurrencies property for tax purposes and are subject to capital gains tax.

While most individual taxpayer issues are relatively straightforward, entities are more complicated. The IRS has had limited funding to thoroughly audit the books of most entities to ensure that they are correctly reporting all their revenue and only including reasonable expenses. Businesses must remember that expenses must be necessary and customary within the industry to be deductible.

With the additional funding, the IRS will increase the number of audits performed on entities. Additionally, the IRS will review more individual returns to verify that income from entities is being claimed on the owner’s returns.

The IRS’s total budget for the 2021 fiscal year was $13.7 billion. The IRA provides additional funding of $80 billion through 2031. So the increase averages $8.9 billion a year, with approximately $5.1 billion earmarked for enforcement each year.

In 2021, the IRS had 81,600 employees, so adding 87,000 new agents would more than double the size of the IRS. That represents a dramatic expansion in the agency’s resources and audit capacity.

The Inflation Reduction Act IRS funding undoubtedly expands the IRS by a massive margin. Taxpayers should expect increased audits and regulatory scrutiny. Whether the increased size of the agency qualifies as “supersizing” is subjective, but the new funding will certainly grow the agency to proportions that we’ve never seen before.

Does the Funding Increase Mean There Will Be an Increase in Audits from the IRS?

Yes, but not right away.

It will take the IRS time to recruit new auditors and then train them. However, there will almost certainly be an increase in audits once the staff is fully trained. Currently, the IRS audits less than 1% of tax returns.

Who is Most Likely to Be Audited?

The increase in auditing staff and funding is guaranteed to increase the auditing rate. However, there is debate on who will be targeted by these increased audits. Proponents of the bill claim that the increase will only affect the wealthy. Opponents argue that it will affect the lower and middle classes.

Currently, the IRS audits taxpayers earning less than $25,000 or more than $500,000 at higher than average rates. Many of the audits performed on lower-income taxpayers are related to the Earned Income Tax Credit (EITC), with approximately 0.77% claiming an audit of the EITC.

Critics of the increased funding worry that the IRS will avoid investigating high-income taxpayers because they are more likely to fight and engage lawyers in their audits. These actions lead to a lower-than-average success rate on audits.

Sen. Mike Crapo, the top Republican on the Senate Finance Committee, said the new funding would “squeeze more revenue” out of Americans who make less than $400,000 because they’re “easy targets.”

The House minority leader, Rep. Kevin McCarthy, said the money would allow the IRS to “harass the middle class.”

The National Federation of Independent Business called the enforcement efforts an “indirect tax” that would burden small businesses with more audits and examinations.

However, both Treasury Secretary Janet Yellen and IRS Commissioner Charles Rettig insist the additional enforcement efforts will target the wealthy, not middle-class taxpayers.

Charles Rettig says that the increased funding will follow the Treasury Department’s guidelines that the audit rate for those making under $400,000 a year will not rise.

It will be years before we know exactly how the increased funding will affect taxpayers. However, there are a lot of politics in play here, so it’s hard to say where the truth lies.

However, it’s safe to assume the truth of the matter lays somewhere between the opposing opinions on the subject.

We will see changes at the IRS over the next few years. Changes will happen as they implement the changes in the IRA and start to spend their increased funding. It will take a while for the agency to ramp up its efforts.

For the time being, all taxpayers should ensure that their tax documents and records are complete. In addition, self-employed individuals and small businesses should be especially diligent in preparing to comply with tax laws and verify that they have adequate records for future audits.

We have answers to your toughest tax questions regarding a possible audit. Talk to the pros at Shared Economy Tax. We can help you solve your toughest auditing challenges or prepare for an audit that may be in the cards due to increased IRS enforcement because of increased IRS funding. Contact us today for a complimentary one-on-one strategy session with one of our pros.